All Walks Beyond the Catwalk and Rankin present 'SNAPPED' at the National Portrait Gallery, the Debate.

'Is Fashion the Lens through which we evaluate our own Identity?'
Since joining Twitter, we've been following Caryn Franklin (@Caryn_Franklin) and All Walks (@AllWalksCatwalk) in their much needed fight for diversity in the Fashion Industry. It was on Twitter that we came across 'SNAPPED', the late shift at the National Portrait Gallery which showcased Rankin's latest photographs of beautifully differing women. Evie has of course been in London since Monday, interning with Tom Lipop, but as soon as I read about the event I booked myself a train ticket, knowing it was an evening simply not to be missed! But fear not if you weren't there - the debate was filmed and will be steamed online. Evie wasn't able to attend, however in a wonderful stroke of luck, whilst waiting to enter the debate, a designer struck up conversation with me. Anna Lee, a Fashion Designer who is to exhibit next week with Vauxhall Fashion Scout, became my company for the evening and I was glad to give her Evie's ticket to the debate! We had an eventful evening - at one point I lost one of my bags - typical me - and Anna had to witness me have a bit of a panic in the middle of the gallery at the thought of being stranded in central London without money/tickets/ID, the poor girl had only just met me. Luckily people at the event were very nice, someone handed my clutch in and I am en route to Nottingham as I write this, thank you thank you thank you!! 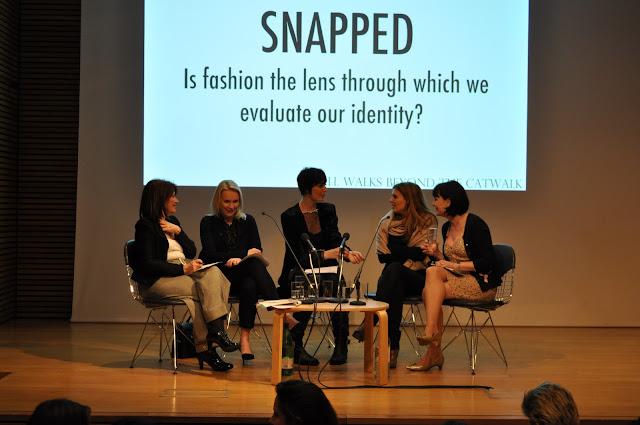 I am just one in a whole Nation of Women who I am quite sure are made to feel inadequate through Fashion's often unforgiving lens. I don't want to pick up a magazine and for the photographs in it to make me feel insecure. One of Lorraine Candy's points was that the ELLE team create images that are beautiful. She argued that women aren't stupid and know what they are buying (in the stick legged models amongst fashion magazines). I understood her point, Fashion is Art, naturally, the fashion spreads she publishes can't look anything other than beautiful. However, why does this mean the same waif thin casts of women should be used? Why can't something beautiful be created with what really is beautiful, and what we need to finally believe is beautiful: real women like ourselves. I want to see curvature amongst the haute couture, a personality wearing the garments for inspiration, not a blank and unhealthy canvas. And isn't that what it comes down to: health. What is more beautiful and inspirational than a woman exuding vitality whatever age, shape or race?
Erin O'Connor told the audience about her more recently conflicting relationship with the Industry. She remembered feeling quite awkward as a girl, and that all changing after being scouted, her 6 ft. frame me being adored by the camera and praised by everyone behind it. But with sample sizes no longer fitting, she sometimes has trouble. She recounted an experience with a Designer, who asked 'what happened to you?!' when a pair of trousers didn't fit backstage at a show. Erin replied 'then why don't you make them bigger?', a fair point, no? The catwalk is becoming more diverse, this Season John Galliano sent Beth Ditto strutting her voluptuous figure down the catwalk, and hopefully at London Fashion Week more designers will choose to follow suit.
Kiki Kendrick's inspirational advertisements were shown behind her as she described the Body Shop's FULL VOICE campaign she worked on, starring RUBY the size 16 Barbie Doll who took the world by storm. She made the point of  the dangerous nature of the saturation of untruthful images to women, and in particular younger women. She commented that the first time you see something, it's different, the second it's not quite as much, and from then on it's just 'normal', and when this happens in magazines with the heavily airbrushed photographs portraying unattainable beauty, young girls don't see that it isn't really normal at all. When honest femininity is even sucked out of a plastic doll in exchanged for unrealistic proportions, these images are put in the mind of even the youngest girls. 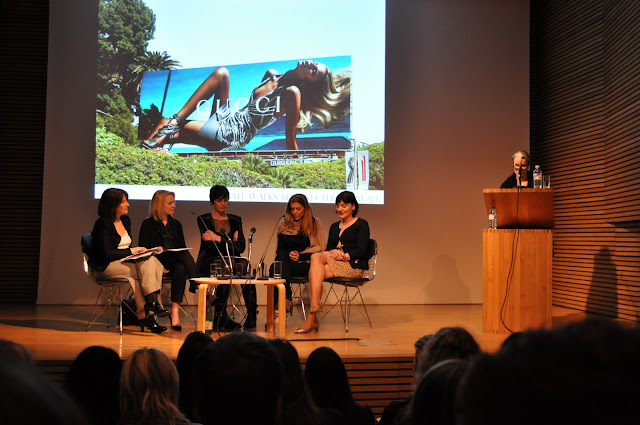 After leaving the Theatre, we made our way to the Gallery itself. By this time, most of the events (such as fashion illustration classes, the chance to be photographed by Alistair Guy for i.D and the 'I am' photobooth) had ended, yet the space was absolutely packed, the music of the female DJs filling the atmosphere. The Gallery was filled with familiar faces, I even bumped into Osman Yousefzada whilst making my way through the crowds to the bar. Since he was one of the first influential people Evie and I had the chance to interview, we were pleased to see him nominated for the BFC/Vogue Fashion Funding recently, but above all, we love the fact that Osman is a key supporter of All Walks, Amira Ahmed wearing one of his stunning designs amongst Rankin's shots. With her arms raised and the fabric of the dress taking the the air with her, she looks empowered and full of joy, the feelings which the All Walks campaign is spreading, and which are definitely catching on.

Posted by Evie Hainsworth and Harriet Gibson at 07:54